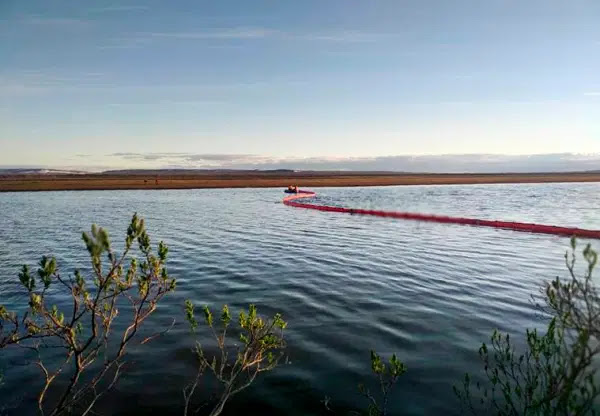 The Arctic Circle has recorded temperatures reaching over 38 degrees Celsius in the Siberian town of Verkhoyansk, likely an all-time high. According to the BBC, while the record still needs to be verified, the temperatures seem to have been 18 degrees Celsius higher than normal in June.
These higher temperatures are pushing the world towards what might be the hottest year on record, despite a fall in emissions due to the coronavirus lockdown.
Earlier in June, Russia declared a state of emergency after a power plant fuel leak in its Arctic region caused 20,000 tonnes of diesel oil to escape into a local river called Ambarnaya. The oil spill was caused when a tank at the power plant collapsed due to melting permafrost, which weakened the support it provided to the tank.
According to a World Economic Forum (WEF) report, the warmer temperatures in Siberia have contributed to May being the warmest on record globally, at 0.63 degrees Celsius warmer than the recorded average temperatures for May between 1981-2010.

What is happening in the Arctic?

According to the Copernicus Climate Change Service (CCCS), in the past month, the most above-average temperatures were recorded in Siberia, where they were about 10 degrees Celsius above normal. However, the phenomenon wasn’t just for May. Siberia has been recording higher-than-average surface air temperatures since January.
Significantly, as per the CCCS, while the planet as a whole is warming, regions like Western Siberia stand out, since they are warming faster than average.
In December 2019, Russia’s President Vladimir Putin expressed concern over the rising temperatures, which could lead to the melting of the permafrost on which some northern Russian cities are built.
Another reason for concern in the region is wildfires. In a Tweet posted on June 22, Mark Parrington, senior scientist at the European Centre for Medium-Range Forecasts (ECMRF), said, “Number & intensity of #wildfires in NE #Siberia/#Arctic Circle has continued to increase over the last few days”.

This is not the first time that rising temperatures in the Arctic have created alarm. A 2017 article in Nature Climate Change mentions that Arctic temperatures in 2016 were “truly exceptional”. The daily anomalies during that year, for instance, recorded above normal temperatures exceeding 16 degrees Celsius in some locations.
The article attributed the rising temperatures to large-scale wind patterns that blasted the Arctic with heat, the absence of sea ice, and human-induced climate change, among other reasons.
Another article published in February this year in IOP Science says that in the last decades, there has been an increase of heatwave occurrences over the terrestrial Arctic. It also mentions that heatwave occurrences in this region have already started to threaten local vegetation, ecology, human health, and economy.