The dog had been waiting for almost a week and local reports said the furry animal was first discovered by staff doing repairs on the bridge the following day of the accident. 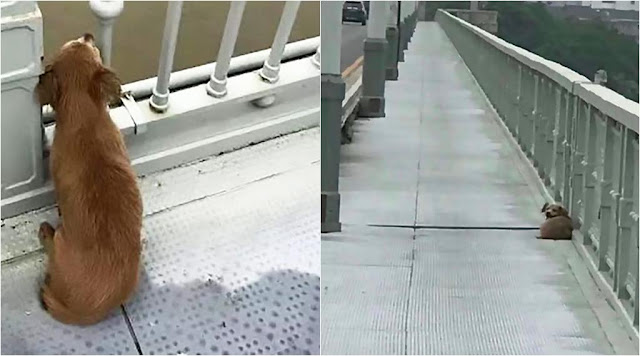 People on Chinese social media sites have been left heartbroken after photos and videos of a dog waiting for its owner by a bridge for many days went viral. The owner reportedly jumped off the bridge leaving his pet behind and the loyal pooch waited for several days in the hope his owner would return.
The animal was photographed in Wuhan, China on a pavement by the Yangtze Bridge. A local resident, known by the name Xu, found the devoted dog sitting by the railing over the weekend, Chutian Metropolis Newspaper reported. He shared some pictures online explaining the situation and had hoped to adopt the pet.
According to the Wuhan Small Animal Protection Association (SAPA), the man tried to help the pooch on June 5 by attempting to feed it. However, the dog refused to even take some water and move from the site.
Daily Star reported that as the images — the dog staring long at the river through a section of the bridge railings – went viral on Chinese social media, local police too came across and later confirmed a “yet unidentified member of the public had been seen leaping on the night of May 30”.
The dog had been waiting for almost a week and local reports said the furry animal was first discovered by staff doing repairs on the bridge the following day of the accident.
Xu wanted to help the animal and thus put the dog in his car and took it back to his house. Unfortunately, it wasn’t long before it ran away, The Shanghaiist reported.
“We asked the bridge officers to check what exactly happened. It was really dark, [we] couldn’t see much on the surveillance footage. [We saw that] the person jumped straight away,” Wuhan SAPA Director Du Fan told Pear Video on Sunday.
After knowing the dog escaped, Du and his team of volunteers are now looking for the animal and hopes to track it soon. “We spent the morning looking for the dog, but we couldn’t find it. If any local residents find it, please contact us. We would like to find a new home. It would be a pity for such a loyal dog to live on the streets as a stray.”
In a statement, the group said, “None of us knows what the dog’s owner had experienced leading up to their decision to jump off the bridge. The dog watched as its owner disappeared into the water below. It cannot speak, and cannot tell us what happened. It could only stand guard in the same spot waiting for its owner to return.”
The post left many teary-eyed online with people praying for the safety of the dog and hoping it can be rescued and adopted soon.
The news comes weeks after another faithful dog went viral last month, as a deceased Covid-19 victim’s dog waited for his owner inside the lobby of a Wuhan hospital for over three months and was recently given to a dog shelter.
0

Leopard Beaten To Death In Assam, Paraded As Trophy