The French bulldog is a small companion breed originating from England. French bulldogs are 11 to 13 inches tall and weigh under 28 pounds. These dogs are known for their distinctive bat ears, flat-shaped heads, and silky coats.

This breed is popular among pet owners because of its playful, smart, and affectionate nature. French bulldogs get along well with kids and love to be lap dogs. Frenchies are adaptable and don’t require much exercise. However, the breed is unfortunately prone to several health issues. 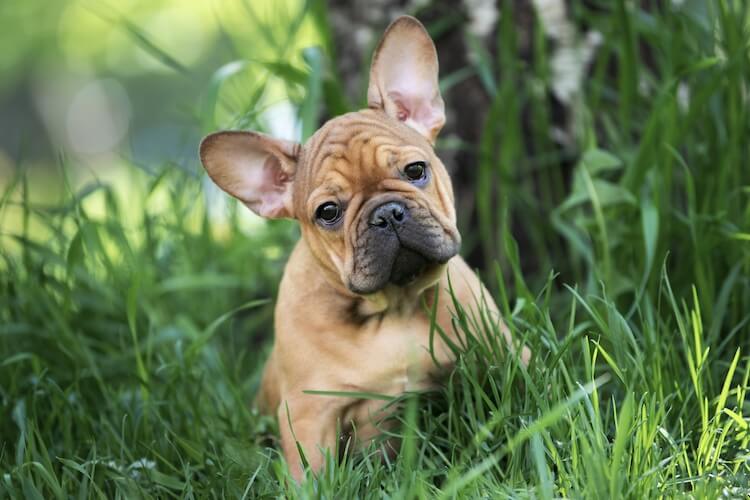 French bulldogs have a short coat, muscular build, and bat-shaped ears. The dog comes in a range of colors. The breed is considered brachycephalic, meaning it has a short, broad skull.

French bulldogs are a small breed, with a height at the withers of 11 to 13 inches and a weight below 28 pounds. The size of these dogs depends on several factors including genetics, diet, and activity level. Males are typically larger than females.

At 12 weeks old, French bulldog puppies are 5 to 6 inches tall and weigh 6 to 9 pounds. These dogs reach their full adult size within 12 months.

French bulldogs have smooth, short coats made up of fine hairs.

The rarest colors are blue and merle, but these are not accepted colors under the American Kennel Club’s (AKC) breed standard. Merle coats are associated with increased risk of health issues like congenital deafness and blindness.

French bulldogs have broad shoulders and loose, soft skin that causes distinct wrinkles around the eyes, nose, and neck. The breed’s legs are stout and muscular. The tail is short, hangs low, and is either screwed or straight in shape.

French bulldogs have bat-shaped ears which are erect, broad, and round at the top. Because frenchies are brachycephalic (have short, broad skulls), their facial features have a squashed appearance. Most dogs have a visible underbite. Eyes are round, alert, and set wide apart. 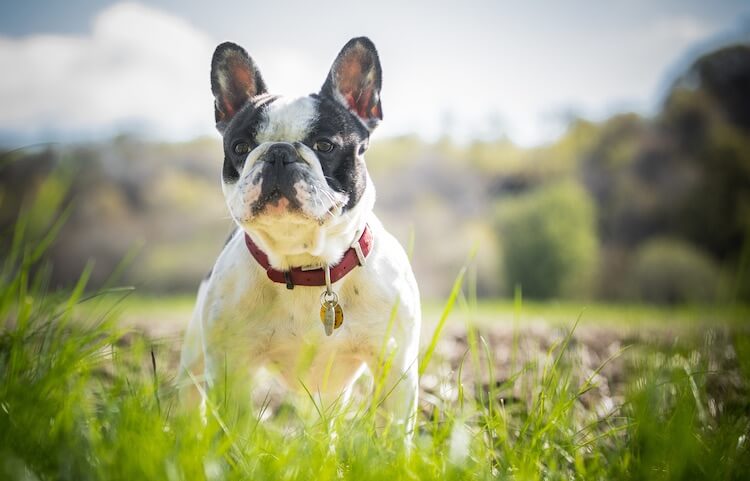 French bulldogs were first developed in 19th-century England to be smaller versions of British bulldogs.

These dogs were popular with the lacemakers of Nottingham who kept the dogs for companionship and to keep the makers’ laps warm while working. After the industrial revolution — which led to the decline of lace making by hand — many lacemakers emigrated to France to find work and brought their dogs with them.

The popularity of French bulldogs quickly exploded in France, especially among bon vivants in Paris who considered the breed fashionable. French bulldogs were eventually bred to have signature bat ears, snub noses, and round eyes. The breed was officially recognized by the AKC in 1898 and is currently the second-most-popular breed in America. 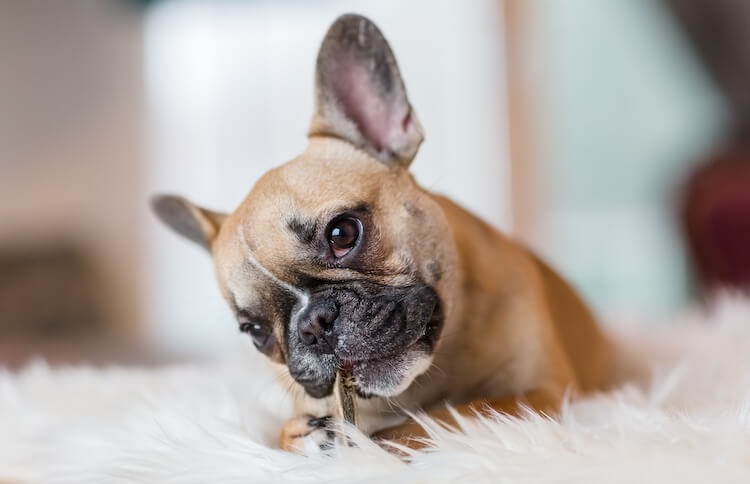 French bulldogs are adaptable dogs that are smart, curious, playful, and highly affectionate, according to the AKC temperament guide.

These dogs are rarely aggressive toward people and other animals, especially when properly trained and socialized from an early age. Frenchies are often called velcro dogs because of the desire to always be by their owner’s side.

Because of their adaptable nature, French bulldogs can comfortably live in any household, including apartments. These dogs have low exercise needs and prefer to spend time playing and snoozing inside the house. The breed isn’t ideal for people who enjoy vigorous, outdoor exercise.

Taking Care of a French Bulldog 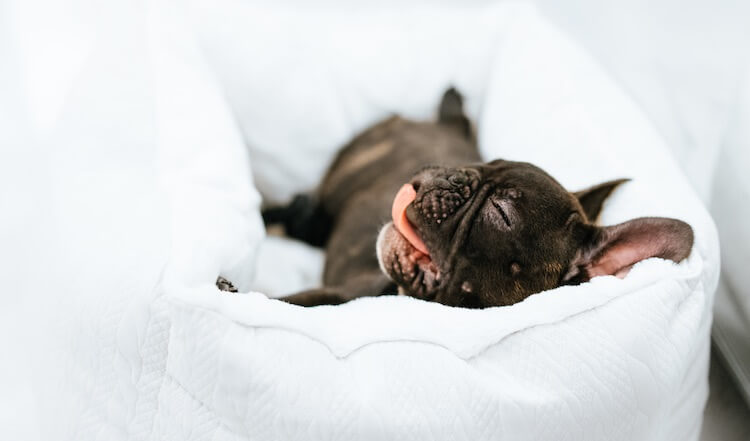 French bulldogs are moderately difficult to care for because of their risk of health problems. This breed thrives with plenty of attention, a balanced diet, and regular vet checkups.

French bulldogs should be fed nutrient-rich kibble containing around 18% protein and 5% fat. Lean protein helps these dogs maintain healthy muscle mass. Avoid free feeding this breed because the dogs will over-eat, which can lead to obesity.

French bulldogs shed minimally throughout the year. Their coats aren’t prone to tangles or mats, so these dogs only need brushing twice a week to keep the fur clean and healthy. Bathe French bulldogs monthly, or whenever they get dirty.

The French bulldog is more difficult to groom than other breeds because of its skin type. The wrinkles and folds tend to collect sweat, debris, and dirt, which can cause irritation and even lead to infections. Regularly clean the dog’s skin with dog-friendly wipes. 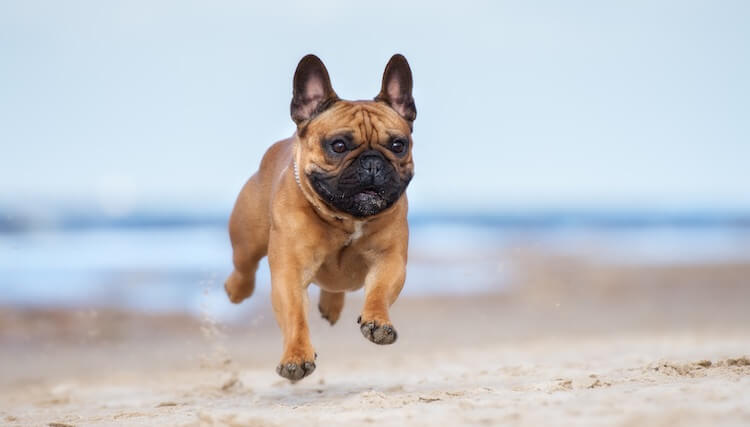 French bulldogs are small, laidback dogs that only need up to 60 minutes of exercise per day. This exercise should be split into two to three small walks. Puppies should be exercised for five minutes per month of age.

Excessive exercise can be dangerous for frenchies because they struggle to breathe and overheat quickly. During hot weather, stay on flat, shaded paths and bring plenty of water. Owners should also avoid water-based activities — frenchies can’t swim nor keep themselves afloat.

Always use a harness when walking French bulldogs because their necks are delicate and can easily get injured if pressure is applied.

French bulldogs are people-oriented and need lots of attention from their owners to be happy. Provide at least 30 minutes of mental stimulation per day to keep these dogs mentally fit. Interactive toys, obedience training, and puzzle toys are all suitable activities.

Frenchies are prone to separation anxiety and shouldn’t be left alone for long periods of time. Soothe anxiety with long-lasting chews and a blanket covered in your scent.

French bulldogs have an average lifespan of 10 to 14 years. Unfortunately, these dogs are prone to many health issues because of their physical anatomy. Always buy French bulldogs from reputable breeders that can provide health screenings.

How to Train a French Bulldog 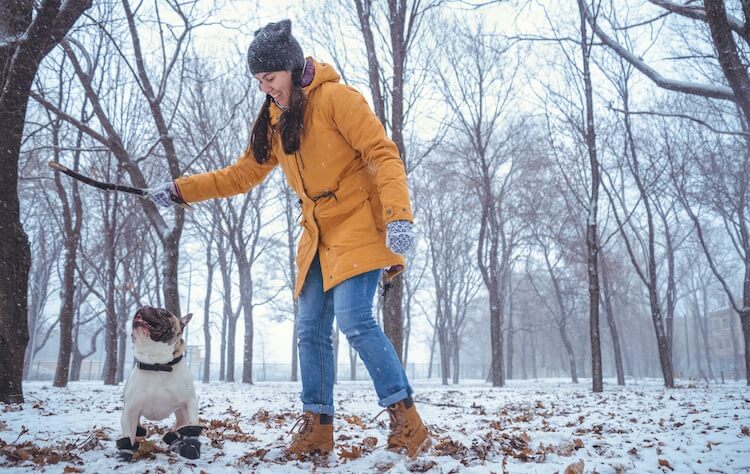 French bulldog training is easy due to their intelligence and people-pleasing nature. However, the breed can be stubborn and sensitive. These dogs respond best to a training approach that’s gentle, consistent, and uses positive reinforcement. Avoid punishments because they don’t provide effective, long-term results. Punishments during training can cause dogs to become anxious or aggressive.

French bulldogs should be exposed to other dogs and people from an early age to help them become confident, well-adjusted adults. Start with socialization, house training, name training, and obedience training. Commands should be reinforced regularly, especially at six to eight months — the time period when dogs often test their owners’ boundaries.

Making training a fun game helps engage stubborn French bulldogs. Keep training sessions short — between 5 and 15 minutes — and only teach one command at a time. Be persistent and don’t get frustrated. 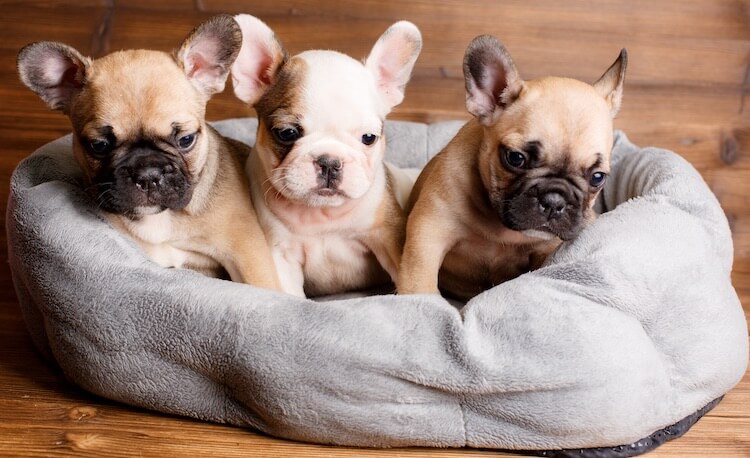 French bulldogs are expensive to buy and look after. The total cost of a dog depends on whether you adopt an adult frenchie or buy a pedigree puppy from a breeder. Health issues will add to the cost of raising a French bulldog.

How Much is a French Bulldog?

The price of a French Bulldog can vary greatly.

A French bulldog puppy will usually cost $2,500 to $4,500 depending on bloodline, coat, and breeder. Pedigree puppies of rare coloration or with show dog lineage can cost over $8,000. Rescuing an adult French bulldog from a shelter is an affordable alternative, typically incurring a fee of around $250 to $500.

French bulldogs are expensive to buy because breeding is difficult and expensive. The dogs typically can’t reproduce naturally due to their narrow hips. The dogs require artificial insemination and C-sections to give birth. Frenchies are also highly sought after around the world.

How Much Does it Cost to Raise a French Bulldog?

Raising French bulldogs is expensive because the dogs are prone to health issues and require regular vet checkups. Expect to pay at least $160 per month. First-year expenses will be higher because of puppy vaccinations, neutering, and supplies like bedding and walking equipment.

The total cost of ownership will vary, depending on the health issues these dogs experience. Common treatments for French bulldogs include BOAS corrective surgery and luxating patella surgery, both of which can cost in the thousands.

Should You Get a French Bulldog? 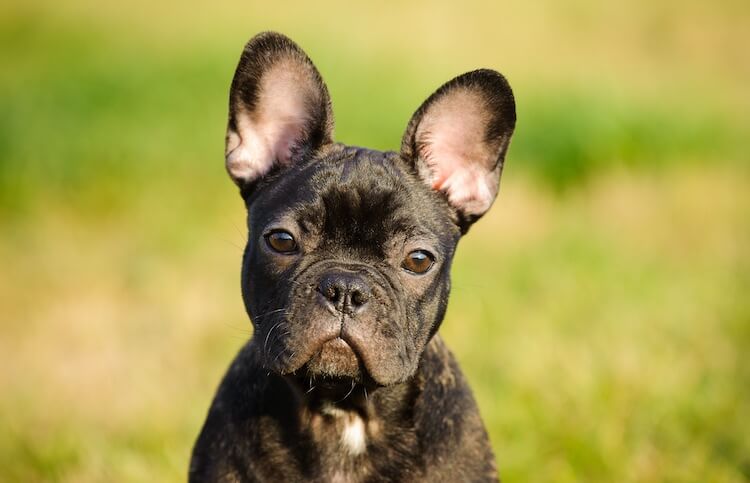 French bulldogs are affectionate, curious, smart, and sociable dogs that make excellent family companions. However, the breed’s risk of health problems means it’s not suitable for all people and lifestyles.

French Bulldogs are Suitable for:

French bulldogs are adaptable and well-suited to people that can provide them with plenty of attention throughout the day. These dogs get along with kids, do well in apartments, and don’t require much exercise. With proper socialization, frenchies can live in multi-pet households.

French Bulldogs are NOT Suitable for:

French bulldogs aren’t suitable for people who lead extremely active lifestyles, spend most of their time outdoors, or can’t train a dog daily. Owners looking for an affordable breed should also avoid frenchies.

French bulldogs often experience separation anxiety and, therefore, aren’t ideal for individuals who can’t be with a dog for most of the day. Left alone for long periods, these dogs will engage in destructive behavior like excessive barking, scratching, and chewing.

How To Train A French Bulldog In 8 Weeks (Easy, Fast, & Fun) | All Things Dogs