The Pomeranian is an affectionate and playful toy breed that belongs to the Spitz family. Pomeranians are renowned for their bold nature, and have an average lifespan of 12 to 16 years.

Pomeranians weigh up to 7 pounds. These dogs have thick double coats, and a Pomeranian’s fur comes in several colors, including sable, red, white, and black. Pomeranians make ideal family pets, but their independent streak can make these dogs difficult to train. Pomeranians need an experienced, firm owner. 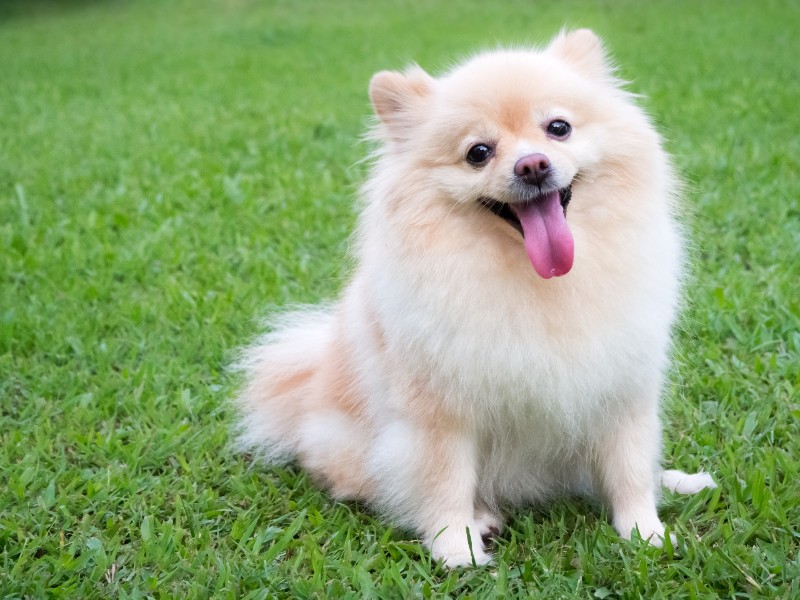 Pomeranians have thick double coats, a fox-like face shape, and erect ears. The Pomeranian’s most distinct feature is its plumed tail, which curls over its back. The tail develops as the dog ages. The Pomeranian’s eyes are almond-shaped and brown.

Pomeranians grow up to 12 inches tall and weigh between 3 and 7 pounds. The dog’s height and weight can vary depending on environmental and genetic factors. Sudden weight loss or weight gain can be a sign of illness.

Pomeranians have thick double coats that protect the dogs from harsh weather conditions. The undercoat is short, dense, and soft, while the outer coat consists of long, coarse hairs. A Pomeranian’s coat comes in many colors, with varying patterns and markings. Common color variations include sable, black, white, and merle.

A Pomeranian’s double coat is hard to maintain. The coat requires frequent brushing and professional grooming to keep it free from dead hair, debris, and matting.

Pomeranians have a wedge-shaped head and pointed muzzle, which give the dogs a fox-like appearance. These dogs carry their heads high and have a ruff of fur around their necks. Most Pomeranians have an alert expression and dark noses.

The Pomeranian, also known as the “Pom,” belongs to the Spitz family. Other breeds in this group include the Samoyed, Alaskan Malamute, and Siberian husky. Pomeranians are the smallest spitz dog breed.

Pomeranians are named after Pomerania, a historical region where the dogs originated. Pomeranians were initially bigger in size, and descended from large Arctic sled dogs. Pomeranians were eventually bred down to become the small companion dogs the world knows and loves today. Pomeranians were officially recognized as a breed by the American Kennel Club (AKC) in 1888. These dogs are currently one of the most popular toy breeds in the United States.

Pomeranians are outgoing and affectionate dogs that make ideal companions. These dogs are adaptable and can live happily in an apartment as long as their needs are met. Pomeranians have a low prey drive and are rarely mouthy. However, poms do tend to bark and howl, especially at strangers. This quality combined with the dog’s alertness makes the Pomeranian a suitable watchdog breed.

Although intelligent, Pomeranians aren’t the easiest breed to train. The dogs have an independent streak and like to do things at their own pace. Poms require an experienced owner who can be firm, consistent, and patient with them.

Pomeranians often suffer from separation anxiety. If left alone for long periods, the dogs can become stressed and exhibit destructive behavior, such as chewing, scratching, and barking.

Taking Care of a Pomeranian Dog 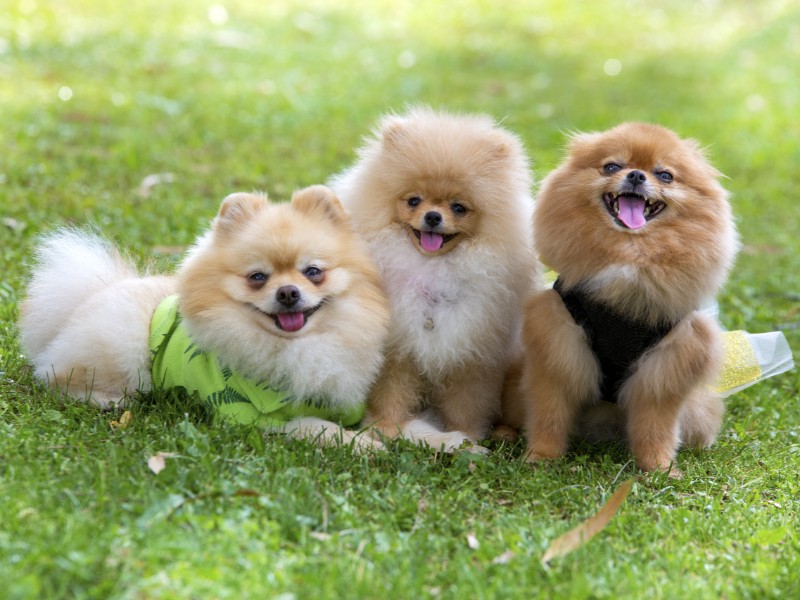 Pomeranians are easy to look after as long as the dogs receive the appropriate care, attention, and love. These dogs are adaptable to most environments and enjoy the company of their family. Pomeranians are easily trainable with the right approach and mindset.

Due to their thick, double coat, Pomeranians have high-maintenance grooming needs. The dogs need plenty of exercise and mental stimulation throughout the day.

Pomeranian puppies must be fed 1¼ to 2 cups of food per day, split into 3 to 4 different meals. Feed puppies nutrient-rich kibble that is high in protein and fatty acids.

Pomeranians require daily brushing to maintain a healthy and tangle-free coat. These dogs shed a lot, and need professional grooming every four to six weeks. A groomer will bathe your dog, clean the dog’s ears, cut its hair, and trim its nails. Failing to groom a Pomeranian can lead to poor coat health, skin issues, and bad odor.

Dead hairs often get trapped in the Pomeranian’s undercoat. A slicker brush will remove trapped or matted hairs. Avoid shaving the double coat. Shaving can permanently damage the hair and hinder the Pomeranian’s ability to regulate its body temperature.

Check for ticks, rashes, soreness, or odor when grooming. Pomeranians need to be washed every few weeks, or more regularly if the fur gets dirty. Wipe under the dog’s eyes to prevent tear stains.

Pomeranians experience excessive shedding in spring and fall and require more grooming during these times of the year.

Pomeranians need 30 minutes of exercise per day, ideally split into 2 walks.  Pomeranians have small legs and struggle to keep up with fast-paced walkers. Match your pace with your dog to prevent your pet from overexerting itself.

Pomeranians have fragile necks. Always use a harness when walking a Pomeranian to avoid putting pressure on the dog’s neck.

Pomeranians are prone to overheating. Walk Pomeranians during the coolest times of the day in warmer weather, and keep to shaded areas. Make sure to bring water for the dog to drink during the walk.

Never leave a Pomeranian unattended in a backyard. The Pomeranian’s small size makes the breed vulnerable to predatory birds, and these dogs are renowned escape artists.

These dogs need plenty of love and social interaction throughout the day. Pomeranians become anxious if left alone for lengthy periods. Provide the dog with a blanket covered in your scent to relieve its anxiety.

Patellar Luxation: This health issue is common in small dogs. Patellar luxation causes an irregular gait and lameness and increases the dog’s risk of knee injuries. The condition can also lead to arthritis. Luxating patella can be treated with surgery.

Tracheal Collapse: This chronic disease affects the windpipe and obstructs the dog’s airway. Tracheal collapse is usually progressive and causes breathing difficulties. The telltale symptom is a harsh cough, which is often described as sounding like a “goose honk.” The condition can be treated with medication and surgery.

Hypothyroidism: This underactive thyroid condition causes the dog’s metabolism to slow down. The common symptoms of hypothyroidism are weight gain, lethargy, and a dull coat. Hypothyroidism can easily be treated with oral replacement hormone medication.

Eye Conditions: Pomeranians are prone to cataracts and distichiasis. These conditions can both cause vision impairment, and are treatable with surgery.

Buy a Pomeranian from a reputable breeder that can provide health clearances. Feeding the dog a healthy and nutritious diet, and ensuring your pet’s other needs are met, will reduce the risk of certain illnesses.

Always stop Pomeranians from jumping off the furniture because the dogs risk injuring their fragile bones and joints.

How to Train a Pomeranian 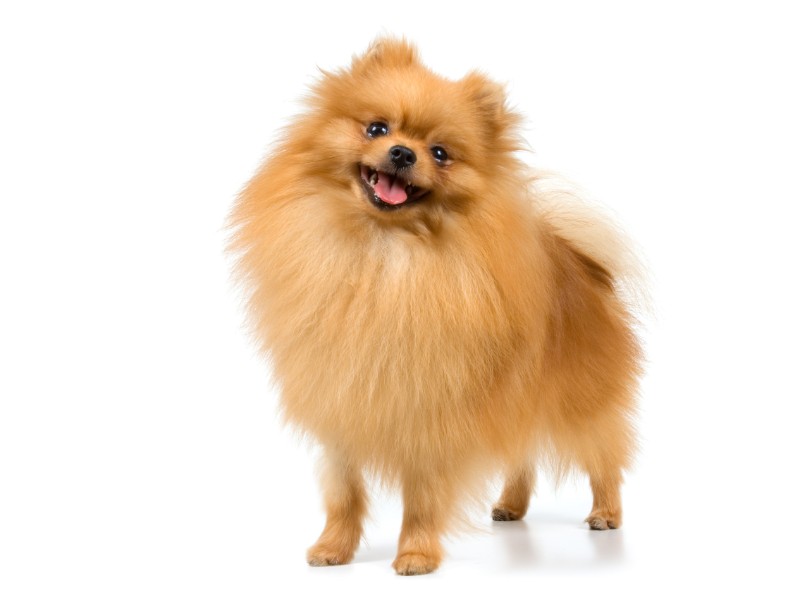 Pomeranians are intelligent dogs that can pick up tricks quickly. However, these dogs can be difficult to train due to their independent nature. Additionally, Pomeranians aren’t the easiest breed to housebreak. A patient, firm, and consistent approach will allow your dog to succeed.

Pomeranian puppies should be socialized and trained as soon as possible. The first 16 weeks of a puppy’s life is its critical socialization period, where the puppy is more open to new things and experiences. Failing to socialize and train a pup early can lead to behavioral issues later down the line. Older Pomeranians are more stubborn.

Pomeranians are often wary around strangers. Exposing your dog to different kinds of people in a controlled environment can prevent wariness.

Pomeranians are an expensive breed. The dog’s initial cost is pricey due to high demand, and monthly care is equally costly.

How Much is a Pomeranian?

A pomeranian costs between $600 and $5,000, depending on the breeder, and the dog’s bloodline, age, appearance, and health background. A Pomeranian puppy sells for $1,200 on average. Puppies are more expensive than adult dogs, and pedigree Pomeranians cost over $1,000.

A cheaper alternative is to adopt a Pomeranian. However, it’s difficult to find these dogs in shelters due to the Pomeranian’s popularity.

How Much Does it Cost to Raise a Pomeranian?

Pomeranians cost between $1,000 and $1,200 per year on average or $100 per month. This amount takes into account food, grooming, and healthcare needs. A Pomeranian puppy’s first-year expenses are around $3,000.

Should You Get a Pomeranian?

Pomeranians are affectionate, loyal, and playful companions. These dogs form strong bonds with their owners. However, Pomeranians aren’t suitable for every home and lifestyle.

Pomeranians are Suitable for:

Pomeranians are adaptable dogs. They’re well-suited to apartment living, as long as the dogs get ample exercise and mental stimulation. These dogs are affectionate and offer their owners comfort and emotional support. Pomeranians get along well with similar-sized animals and older kids that know how to properly handle the dogs.

Pomeranians are ideal watchdogs thanks to their wariness of strangers and instinct to alert their owners if they sense a threat. While intelligent, Pomeranians have a bold and independent nature. These dogs do best with an experienced owner that can be patient and consistent during training.

Pomeranians are NOT Suitable for:

Pomeranians aren’t suitable for first-time dog owners. They can be bold, independent, and difficult to train. Pomeranians shouldn’t be put in households with boisterous young children or much larger animals. These dogs have small, fragile bodies that can easily get injured.

Pomeranians are yappy dogs that love to howl and bark. These dogs aren’t compatible with people living in a crowded area, where neighbors are likely to complain about the noise. Pomeranians experience separation anxiety, meaning the dogs need an owner that doesn’t live a busy lifestyle and can be with their pet throughout the day.

Pomeranians aren’t suitable for owners on a low budget. These dogs are an expensive breed, and their grooming, food, and healthcare costs quickly add up.