Puppy shots are one of the most cost-effective ways to prevent diseases and help puppies live a long and healthy life.

For many owners vaccines can be confusing, especially when you consider core and non-core shots.

Puppies grow very fast so a puppy shot schedule is vital to keep them healthy and safe.

Knowing when to take your puppy to the vets, which shots to get, and how much to pay is especially important during your puppy’s first year.

Many reputable breeders will ensure the first puppy shots are administered before re-homing.

Make sure to ask your breeder what shots or health tests have been completed and collect vaccination cards (where necessary).

Before your puppy has had their combined vaccine booster (week 10) you should limit their exposure to public places. This will help to reduce the chance of them catching any infectious diseases.

A typical puppy vaccine schedule will span over your puppy’s first 20 weeks.

You should expect to visit your vet repeatedly for shots, boosters and health check-ups during the first few months:

Vaccines At Weeks 6 To 8

At six to eight weeks of age, puppies should only walk indoors (or in private yards) to limit their exposure to risky areas. They should be picked up and carried in areas where other dogs may have been.

During this time period a single shot of the combined distemper vaccine is required. This also includes adenovirus (infectious hepatitis), parvovirus and parainfluenza (DHPP).

Booster doses are given two to four weeks after their first injection.

Puppies living in high risk areas they are often given a third and final dose at 18 weeks old.

Canine influenza is a non-core (optional) shot that can be given from six weeks of age. Two initial doses are required two to four weeks apart.

Your vet will advise you when the combined distemper booster shot is required. It can be given two to four weeks after the first vaccine.

Normally a combined distemper vaccine booster is given at week nine.

During this two week period there are three non-core vaccines:

The Rabies shot is core or non-core depending on which state you live.

If it is a core shot, it should be administered after 12 weeks of age.

A second dose is required a year following the initial dose.

If you live in a high-risk area your dog will have a final dose of the core vaccine for distemper, parvovirus, adenovirus and parainfluenza at 18 weeks of age.

Most puppies will have completed their puppy vaccination schedule by week 16. You will then need to plan their booster shots.

The core vaccine for distemper, parvovirus, adenovirus, and parainfluenza will need repeating within one year of the final dose. Boosters will then be given at intervals of three years.

Rabies will need revaccination between one to three years.

None-core vaccines such as Bordetella, Leptospira, Lyme and Influenza will need revaccination annually. 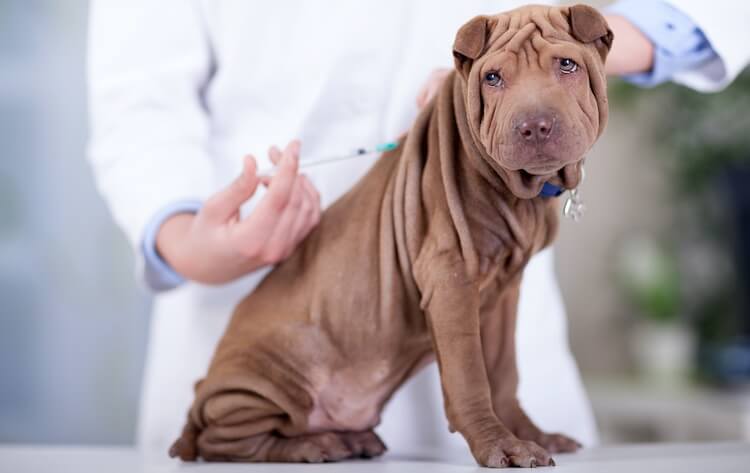 The price of puppy shots will largely be determined by where you live, the fees your vet charges and how many non-core vaccines your puppy has. Call local veterinarian practices to see if there is a large price difference.

This price is made up of two core shots:

What Shots Do Puppies Need and When? 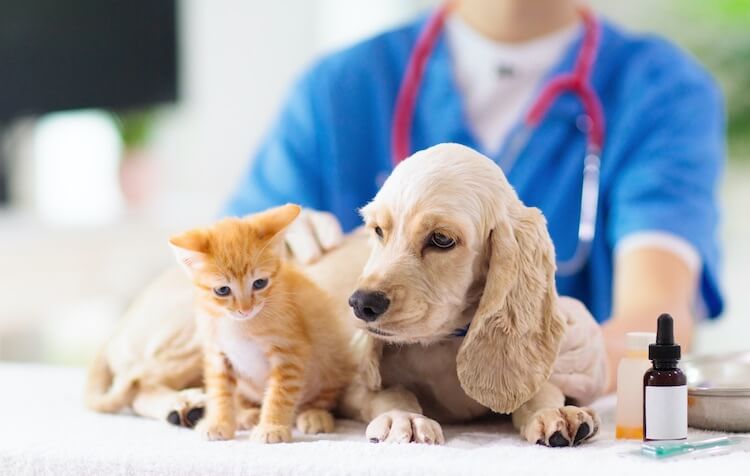 Most puppy shot schedules start at six weeks of age with the core combined distemper vaccine. A second dose is given two to four weeks later. Non-core canine influenza and Bordetella vaccines can be administered at the same time.

Then non-core Lyme and Leptospirosi shots can be administered at nine weeks.

Finally, Rabies should not be administered earlier than 12 weeks of age and is a core vaccine for some states (e.g. Washington and Kentucky).

Your vet will advise you on the booster schedule for the vaccinations your dog has been given.

Unfortunately, dogs can be exposed to a range of diseases that sometimes are fatal. Some geographical areas in the states are riskier than others.

It is important you understand the different puppy shots available and what diseases are an issue in your state.

This is a tick-borne disease that transmits from an infected tick when they bite your dog. It causes a range of issues in organs and joints.

The primary carrier of Lyme disease is the blacklegged tick.

Ticks become infected when they feed on an infected animal. They can’t fly or jump, so they wait in long grass and grab onto a dog as they brush by.

Symptoms of Lyme disease in a dog include: fever, loss of appetite, reduced energy, lameness, stiffness and swelling of joints. Ultimately, symptoms progress to kidney failure.

The shot is optional because there are other ways to help protect your dog from ticks:

Lyme disease can sometimes be treated with antibiotics, but symptoms may persist and long-term treatment may be necessary.

Rabies is a virus affecting the brain and spinal cord of a dog.

It is transmitted via the saliva of an infected animal, for example a bite. Dogs exposed to wild animals are at risk of being infected.

Signs and symptoms may not show for between two to eight weeks after being bitten, however, once symptoms appear it often results in fatality. Symptoms include:

The rabies vaccine may be core or non-core in your state. However, the risk of rabies is very real if exposure is likely. There is no current treatment or cure. That is why vaccination is often mandatory in many states.

Kennel cough is a respiratory infection caused by a range of bacteria and viruses. The most common virus is Bordetella bronchiseptica.

Dogs get infected in crowded areas such as dog parks and kennels which is why it is known as kennel cough.

The symptoms are very obvious with a hacking cough, sneezing and a runny nose.

Dogs are usually sick for between one to two weeks.

It can cause complications for elderly dogs, puppies or those with a weakened immune system.

Parainfluenza is a common virus that causes kennel cough (after Bordetella bronchiseptica).

Canine parainfluenza is highly contagious. Symptoms, much like kennel cough, include a dry hacking cough, a fever, sometimes a runny nose, sneezing and eye inflammation.

It is easily passed in areas where dogs crowd like kennels, shelters and pet shops.

An infectious disease caused by the Leptospira bacteria it can affect both people and dogs (i.e. is zoonotic disease).

These bacteria are found in soil and water.

Dogs are at risk if they drink from rivers, lakes, streams or spend time roaming rural properties with exposure to infected rodents.

Symptoms of Leptospirosis can include: fever, shivering, lethargy, changes in toileting habits, dehydration, vomiting, loss of appetite and jaundice.

It is normally treated by antibiotics, but long term damage may have already been done.

Parvovirus is the most talked about dog virus because it is highly contagious, causes gastrointestinal illness and can be fatal.

This is an important vaccine. You need to limit your puppy’s exposure to any risk until they have completed their booster shot.

It is a very resilient virus that can survive on people, objects and in the environment. It is resistant to many usual household cleaners and can live inside at room temperature for two months.

Your dog’s poo will be bloody diarrhea with a very distinct smell.

Like the parvovirus, distemper is highly contagious and can be fatal. It is a core puppy shot for good reason.

It is rapidly transmitted through: direct contact with an infected animal (e.g. raccoons, foxes, coyotes, ferrets, and mink), airborne exposure or from a puppy’s mother’s placenta. If your dog has access to wild animals this puts them at risk.

Unlike the parvovirus, distemper can be killed by most disinfectants.

Canine coronavirus is an intestinal infection in dogs that causes abdominal discomfort.

It is contracted by exposure to infected fecal matter or contact with an infected dog.

There is no specific treatment for canine coronavirus. However, if a dog becomes dehydrated, IV fluids are sometimes required.

The American Veterinary Medical Association lists the canine coronavirus puppy shot as non-core and not recommended.

Canine hepatitis is a liver infection caused by canine adenovirus.

It is spread by contact with bodily fluids such as: saliva, nasal discharge, blood, urine and feces.

The first symptom is a high-grade fever followed by other symptoms of: lethargy, thirst, eye discharge, abdominal pain and vomiting.

Canine Hepatitis can be fatal, but the risk is higher in puppies.

Maternal antibodies interfere with immunization of puppies until they are 9-12 weeks old. So this shot should be given after 12 weeks of age.

How Many Vaccinations Do Puppies Need? 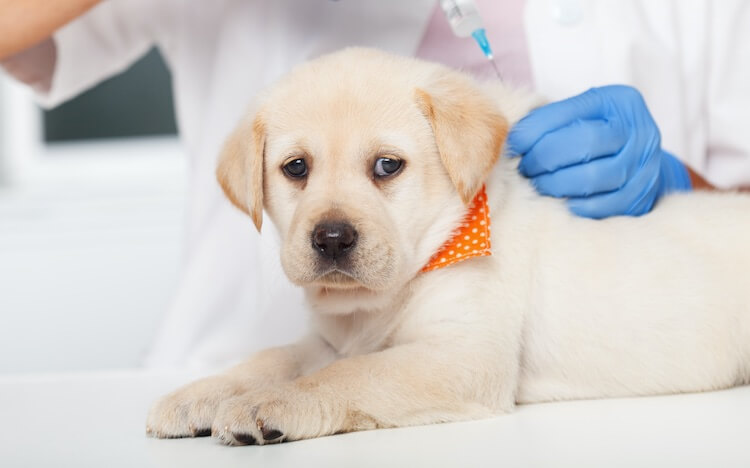 One single puppy shot for distemper, adenovirus, parainfluenza, and parvovirus is given before week eight with a booster two to four weeks later.

Shots are normally given between weeks six and twelve.

Core vaccines are recommended for all puppies or dogs without a vaccination history. These include canine parvovirus, distemper virus, canine adenovirus-2 and in some states rabies.

Leptospirosis is also defined as a core shot in California.

Non-core shots are optional. These should be considered based on the risk of exposure and the lifestyle of the pet. Non-core vaccines include:

Finally, there are unclassified vaccines such as the canine coronavirus.

Why Are Some Puppy Shots Non-Core?

Sometimes the vaccination is less effective in protecting against the disease. Dogs vaccinated against “kennel cough” can still get it.

Many of the infectious diseases are also self-limiting or respond well to treatment so it’s determined cure is better than prevention.

It is essential to discuss what shots your puppy needs with your vet based on both where you live and your lifestyle.

Side Effects Of Puppy Vaccines

The most common side effects of shots are lethargy, redness or swelling at the vaccination site, loss of appetite and low-grade fever.

There are also more serious side effects associated with vaccines including:

It is important to tell your vet about side effects immediately.

Vaccines are essential to help keep puppies fit and healthy.

Keeping them up to date is often a requirement of your insurance policy.

Many owners ask their vet to administer the 5 in 1 shot to vaccinate against distemper, adenovirus, parainfluenza and parvovirus. This shot is given during weeks 6 to 8 and a booster follows two to four weeks later.

Vaccines are an important part of dog ownership and understanding what shots do puppies need is essential. If you are unsure leave a comment below or speak with a vet.

Elephant playfully kicks buffalo in the head and it retaliates.